At the beginning of The Cage

(at least viewed via amazon instant view) there is a short interview with Gene Roddenberry. It was pretty interesting, he said that this original pilot was not accepted, but they let him shoot another pilot and obviously that one went forward. There were a few interesting items from that interview, apparently the network was unhappy that he didn't have the entire bridge crew as white men. In addition to them being multi-cultural, the first officer was a woman. We might think that women would appreciate this fact, but apparently the women in the test audience said "who does she think she is?" Hilarious! Also, apparently Spock's eyebrows and ears were intended to make him look like a devil. I love it.

The Enterprise received a distress signal from an unexplored solar system 18 light years away, and it turns out the USS Colombia disappeared from that general area about 18 years ago. Since there is an M-class planet in that solar system, it is possible that there are survivors, but Captain Pike decides to continue on to starbase to help his own crew until they get more evidence that there truly are survivors. In the meantime he asks the doctor in to his quarters, and the doctor gives him a martini because there are things a man will tell his bartender that he won't tell his doctor. I love it! Anyway, in this conversation, we learn that they have just come from a mission where several people died and many were injured. Pike blames himself and considers leaving the service. 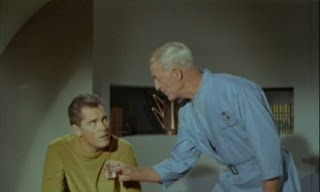 They get a second distress call indicating that people did indeed survive the crash landing, and they head that way to help them out. When they get down to the planet, they see a tent city with a bunch of old scientists and one young lady, who was apparently born right around the time of the crash. One thing that caught my attention was a guy on the away team excitedly tells an old scientist that he can make it home soon because "the time barrier has been broken", what does that mean? Anyway, the woman takes Captain Pike off to the side a bit and some big brain aliens pop out from a hiding place in a rock wall, stun Pike, and drag him into the mountain before anyone can do anything about it. 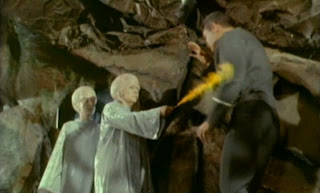 Pike wakes up in a cage with one transparent wall, it appears that he is in some sort of alien zoo. We soon learn that the big brain aliens have some pretty amazing telepathic powers and are able to project illusions into people's minds. The tent city and survivors were only illusions and Pike is soon teleported in his mind to a place similar to the mission they were at earlier where some of his crew had died. He was with the woman from the camp earlier, who claims to be an illusion as well, but Pike isn't buying it. After some more illusion stuff, he winds up in the cage again with the woman. We learn that if you fill your mind with primitive aggressive thoughts, the aliens can't read it, this will come up later. 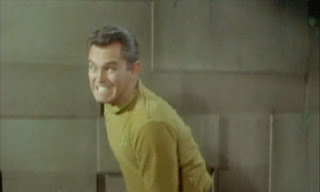 Meanwhile the Enterprise crew were trying to figure out what to do, they tried shooting at the mountain where Pike was taken underground, but with no success, they even carted down a huge laser which should have blown a hole right through it, but again nothing. We learn later that they had indeed blown a huge hole in the mountain, but the aliens manipulated their minds so it looked like they failed. After regrouping on the ship, they tried to beam another away team down, but the aliens manipulated the transporter operators to only beam the two women down into the cage with Pike. He was instructed to choose between either one of them or the girl who was already on the planet. During the discussion Pike managed to get ahold of one of the aliens. He used the phaser that one of the women had brought down to blow a hole in the cage wall. Even though it looked like nothing had happened, he figured out that the alien just made it seem that way, he threatened to blow the alien's head off if he didn't shut down the illusion, which he did. The jig was up at this point, and we learn that the woman was actually a survivor of the crash, but when the aliens has fixed her injuries she wound up a bit deformed, her beauty was all illusion. This whole thing was for her benefit, so they could get her human companionship. But no worry, they let the Enterprise crew go and gave her the illusion of Pike staying with her. This seemed like a good conclusion, but it seems somewhat...dirty. 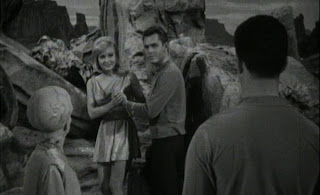 Pike: We learn that Pike is quite smart, as he figured out what was going on pretty quickly and was able to outsmart the aliens. He also cares a lot about the people under his command, as we found out from his talk with the doctor. He was also stressed from the job to the point that he was considering leaving star fleet.

Spock: Much more emotional that my impression of him. I'm assuming this is one of those things that got changed after the pilot.

The Enterprise: Not really a character exactly, but I did make a couple notes about the ship. It has 203 people on board and apparently it can "break the time barrier". I'm curious of those things will come back later. My impression is that the Enterprise has a lot more people than that, but I don't know where that would have come from, I guess in the DS9 episode "Trials and Tribble-Ations", the Enterprise seemed quite crowded.

I quite enjoyed this episode. I'm not entirely sure how I want to calibrate my scoring system, but I want to save 9's and 10's for episodes that are truly exceptional. I have a feeling I will be giving out a lot of 8's. Please let me know how you would rate it in the comments.