Sorry I missed a week, but in my defense, I do have a good excuse. I am going to try to keep up with them once a week because I have fun writing them, although I might have to streamline it a bit. I'll probably have to do a lot fewer screenshots. It's a shame, because I have a lot of fun going and getting them, but it does take a lot of time.

The Enterprise is on a relief mission of sorts, they need to get some medicine to some people, and they have 5 days to get there. It is only a 3 day journey so they decide to send some people in a shuttle craft to investigate at quasar. Things of course go south and the shuttle lands on a nearby planet. Because of radiation the transporters and sensors are pretty much useless, and now they only have 2 days to mount a proper rescue before they must leave to deliver their medical supplies. The shuttle crash lands on a planet and Spock is the ranking officer. There is an immediate clash between the other crewmen in the shuttle and Spock over his logical approach to command. This pretty much seems to be the whole point of the episode. He's cold and calculating, for example the other crewmen want to bury a guy who died, but Spock said it's not worth doing because it's dangerous, they are battling the clock and there's no advantage to it. Why is it dangerous? There's some big monster guys on the planet.

Ultimately they are able to lift off of the planet, but they are too late as the Enterprise has already started leaving. Even though they have very limited fuel Spock dumps it and ignites it, dooming them because without the fuel they will fall back to the planet. But this allows the Enterprise to find them and beam them out. Oh yeah, in the meantime they fixed the transporters.

The way they portray Spock as a 100% logical being was kinda rubbing me the wrong way in this episode. It's not just that he's logical and without emotion, he can't understand emotion and refuses to consider that others might act emotionally. It's hard to imagine him rising to this rank in starfleet without ever learning this lesson.

I also found this a strange choice. I guess it was one more obstacle to overcome, but they fixed it before they needed it anyway. And there wasn't something interesting or novel about the fix as far as I can tell. It was just "the transporters don't work" and then later "they work now!"

I know they were trying to create a situation where Kirk would have to leave them behind, but it seemed like an incredibly poor choice to send the shuttle out when they had such a small time window. It was just a quasar, it would be there in a week or whatever. They should have delivered the medicine and come back. I suppose it could have been doing something that is rare and they could witness it, but I don't think that was the case here. Plus, if you are delivering medicine it is silly to plan to get there in exactly the time you need instead of getting there as quickly as possible.

I thought the quasar graphic was really cool, and I was curious what the original looked like, so I went and looked at the non-remastered version. It's quite a difference. They really did a good job on the new effects.

I'm trying to decide between 6 and 7 here, guess I'll split the difference. It was a fine episode, but there were definitely issues.

I've decided to remove intense debate and go back to the default blogger comments. Of course, ID holds your comment threads hostage so you will stay with it, but luckily I don't have too many. I have taken screenshots and edited them into the bottom of their posts so they won't be lost. 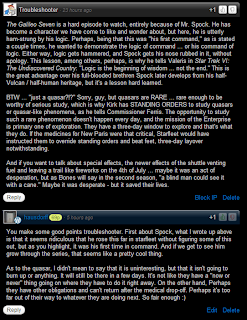 Posted by Hausdorff at 9:40 PM