The episode starts with a joyous scene, the crew is going to beam down to Cestus 3 and spend some time with the head of the colony there who has notorious hospitality. However, when they get to the surface they see the colony is destroyed, when Kirk calls back up to the Enterprise they are under attack from a mysterious ship so the away team is on their own for a while. 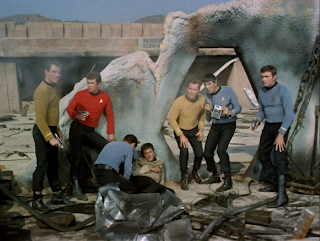 They run around on the surface of the planet for a bit and the Enterprise fights with the ship, but then the enemy ship leaves and they are able to recover their people. Kirk concludes that this must be an aggressive species and decides to destroy the pursue and destroy the ship, otherwise they will be back to destroy other colonies. Spock takes issue with this, but Kirk will hear none of it, he says

Out here we are the only police men around, and a crime has been committed

As they are pursuing they come somewhat near to a solar system and the enemy ship stops completely. Kirk is happy that he will now be able to catch up, but the Enterprise is also stopped. They get a signal from the solar system that they are an advanced race who doesn't like the violence going on here, they decide that the best thing to do is take the two captains of the ships, let them battle it out and the winner will go free, the loser will be destroyed. 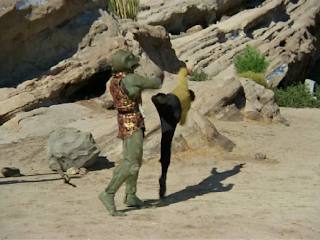 It turns out the enemy is the Gorn, they are extremely strong physically, Kirk throws some rocks at him, and even drops a boulder on him from quite high up, but he is not killed. Kirk then takes a bunch of minerals and puts them into a bamboo shoot to make a cannon of sorts. He nearly kills the Gorn but changes his mind at the last second. Leading up to the final attack by Kirk, the Gorn tells him they killed the colony because it was encroaching on their territory. Upon reflection, Kirk realizes this is a possibility because it is an unexplored area of space. 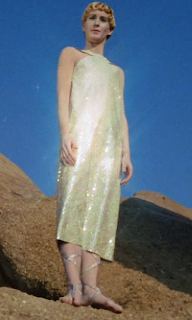 An angel looking guy shows up, he's from the nearby solar system and is supremely impressed with Kirk for not killing the Gorn. He says they are still half savage, but perhaps in a thousand years or so they can make contact with each other again.

I don't think this is the first "red shirt" moment, but it was the first that really jumped out at me because it seemed to be quite ridiculous. When they beamed down to the destroyed colony Kirk motioned for the red shirt to look around and he was immediately killed. 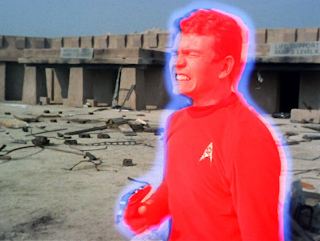 However, moments later both Kirk and Spock were running around with no cover and they were just fine. It looked like they were being attacked with mortars, but nothing like what the red shirt had to endure 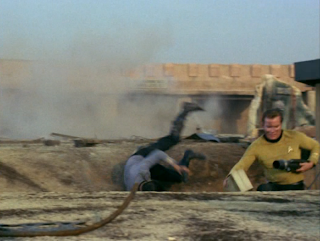 This episode was tested out on mythbusters, unfortunately it was busted. There was no way for the bamboo to hold any blast sufficient enough to kill the Gorn. Unfortunately, it also means that I knew what was going to happen in this episode, although I guess I can't complain too much to have a 50 year old show spoiled :)

Solid episode, some iconic stuff in there.
Posted by Hausdorff at 12:44 PM