The Return of the Archons: TOS Season 1 Episode 21

We start with Sulu and O'neil on a planet being chased, O'neil runs off but Sulu waits for transport. Sulu gets hit with some mind-altering attack right before he beams up and is clearly acting strange when we gets back to Enterprise. So Kirk and a handful of other guys beam down to try to figure out what is going on, when they get there everyone seems pleasant and ask if the away team is here for the festival. They say yes as it is good cover, but quickly it turns out that the festival largely consists of chaos in the street. 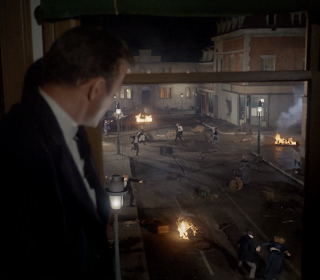 It seems that most everyone is being mind controlled (are you of the body?), but the away team finds a few guys who are not and seem to want to gain freedom for themselves and everyone. Some guards come to them and ask for them to come see Landrew (who is apparently in charge here), they say 'no' and the guards don't seem to know what to do. Spock takes a weapon from one of them, but it turns out to simply be a pipe, it must just be a focusing object for a powerful weapon being emitted elsewhere. Very interesting indeed.

They also talk to the Enterprise and it turns out that some sustained attack is being levied against the ship. They are having to spend all of their energy on shields, and their orbit is decaying. Their time is severely limited. 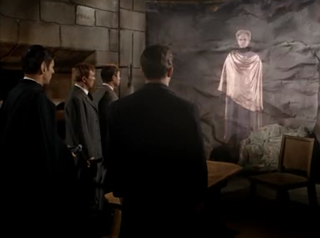 The away team finds Landrew and talks to him, ultimately they are knocked out and thrown in jail. They eventually break out of jail and Kirk wants to go to confront Landrew about what is going on. After some argument, they are led to Landrew, who was previously a holographic projection on a wall, they shoot the wall and it is revealed that Landrew is actually a computer. This society is how a computer would view perfection, but people are not free even to think for themselves. They convince the computer that what he has done is not in line with the intention of his programming and the computer self-destructs. Then everyone who was brainwashed is set free. Kirk left some people on the planet to help them rebuild their society.

When they were in prison, Spock and Kirk had an amusing conversation about how the guards responded to them

Spock: Their reaction to your defiance was remarkably similar to the reaction of a computer when fed insufficient or contradictory data

Kirk: Are you suggesting the law giver's a mere computer?

Spock: Simply that all the facts are not yet in.

I found this hilarious, as Spock is saying that not knowing how to react to insufficient data is computer like, then in his next line he does just that. Spock is acting like a computer in exactly the way he is observing the guards. Even more hilarious, right at the end of the episode Kirk tells Spock he would make a good computer, to which Spock replied "thank you".

Part of why this is so amusing is that Spock is apparently a man who aspires to become a machine, where Data in Next Gen is exactly the opposite. I guess that must have been the point when they were initially writing data, turn the premise on it's head.

This same thing happened last episode, but the Enterprise apparently requires power just to maintain orbit. I don't know why this bugs me so much, but there's no reason for that. If they put themselves in orbit properly they would stay that way without power.

It's time you learn freedom is never a gift, it has to be earned.

Damn good line. Although it did occur to me that it isn't really true, even in this situation. For everyone who was currently a zombie of Landrew, freedom would be a gift. Nevertheless, the point still stands, freedom needs to be fought for and earned whenever there is someone trying to take it away.